The Banqueting Hall has been remodelled several times over the centuries. It previously served as a grain store, but was later redesigned and divided up into several small rooms. In connection with the conversion of Egeskov from a working farm to a tourist attraction, Countess Nonni Ahlefeldt-Laurvig-Bille fully renovated the room in 1975.

Look up and admire the original beamed ceiling with its fine corbels. It dates back to when Egeskov was built in 1554. The ceiling was uncovered again during the renovation, when the Banqueting Hall was restored to its original, single room format. The Banqueting Hall was the first room that was opened to the general public, when it was used for musical events and lectures, for example.

The walls in the Banqueting Hall are decorated with giant paintings, each with a fascinating story to tell.

Keep an eye on the portraits of Admiral Niels Juel and his wife, Margrethe Ulfeldt. As you walk alongside the windows in the hall, you will notice that both their eyes and the tips of their boots seem to follow your every move. 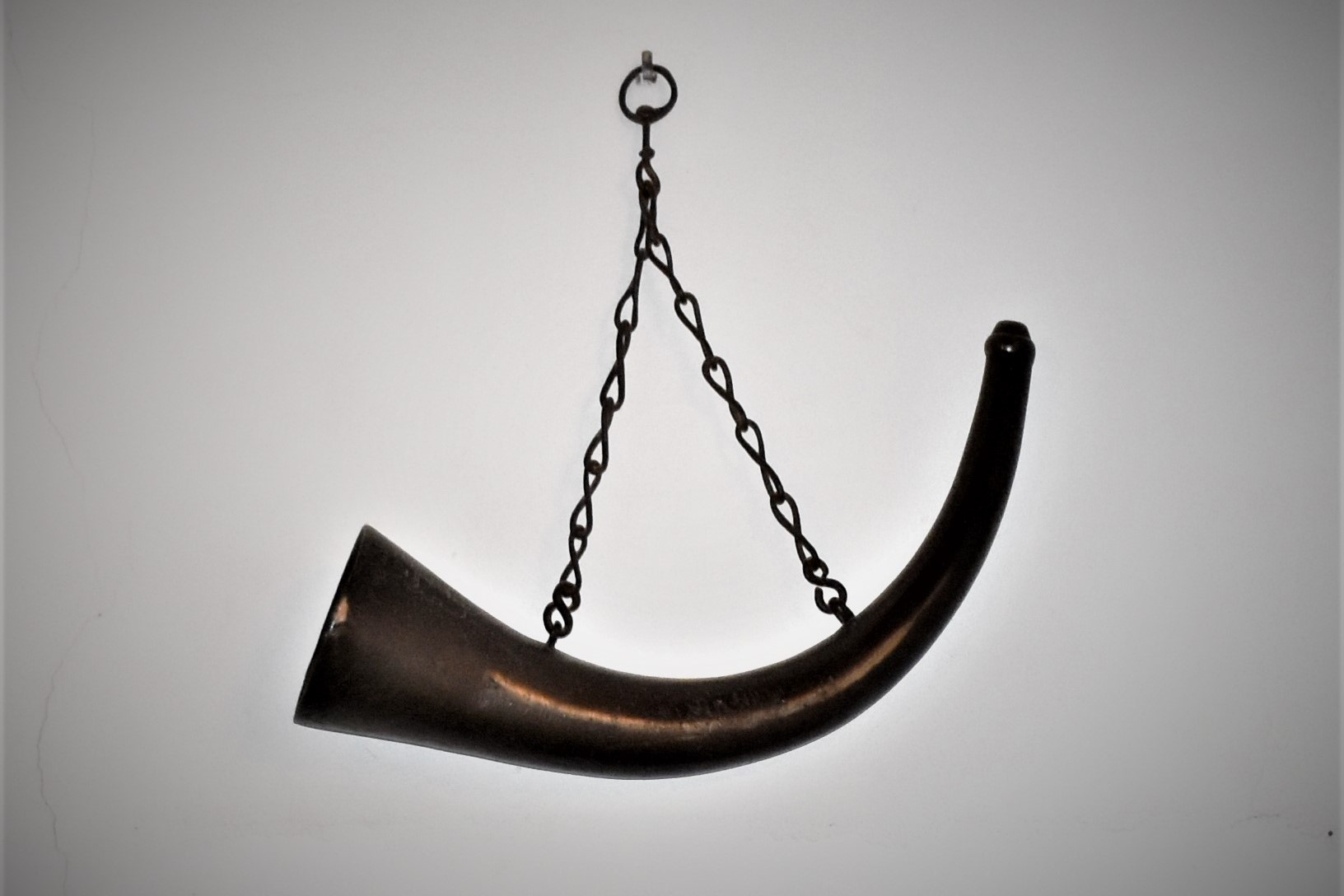 The horn belonged to Laurids Brockenhuus, of whom it is said that he was so strong that he could grab hold of the bronze horn that hung in the gatehouse, lift both himself and his horse up and blow the horn to announce his arrival. The horn is marked with his and his wife’s coat of arms and the year, 1615. 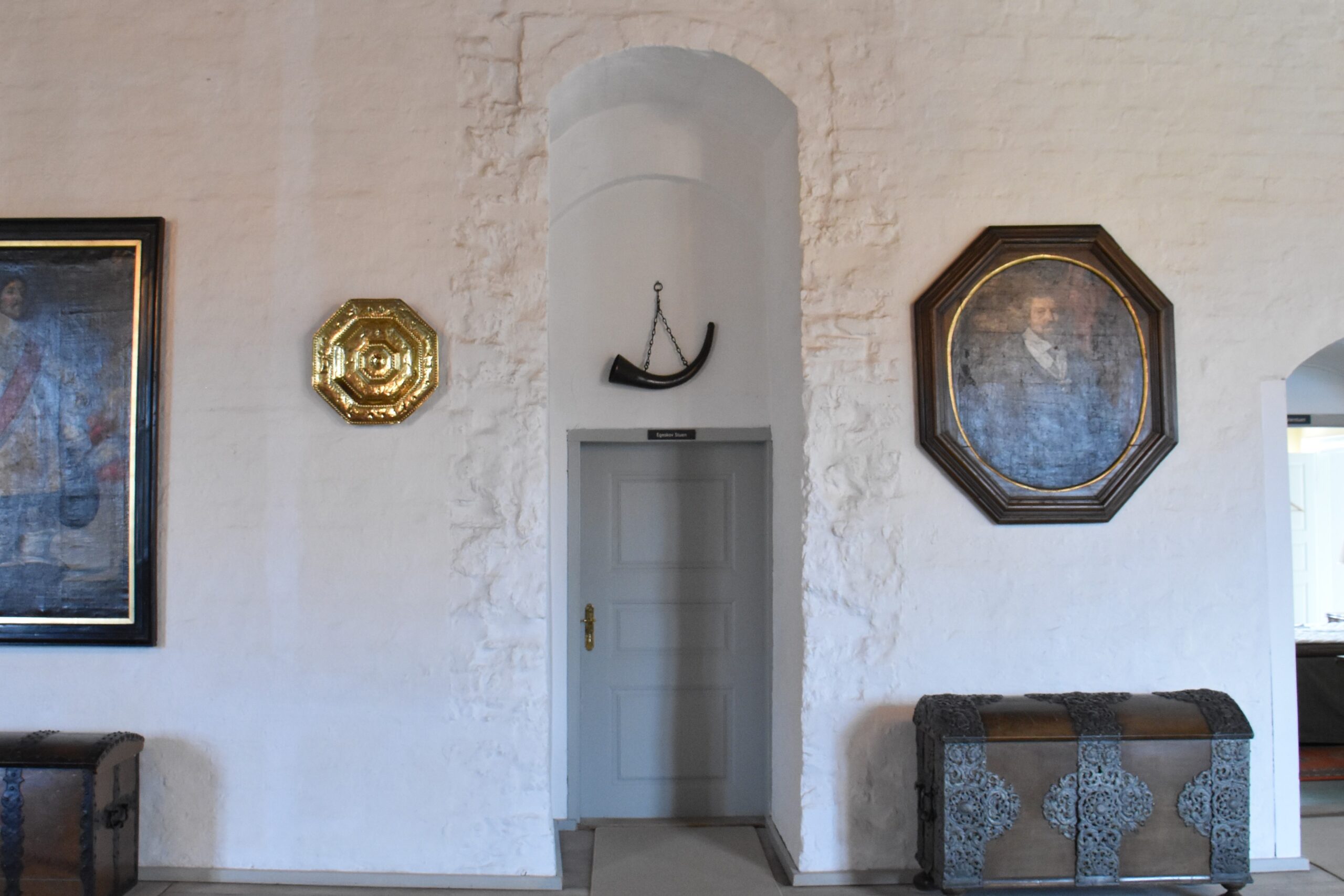 In the doorway where the bronze horn hangs, there was once an opening to a well. The well is still there and continues all the way down to the castle cellar. 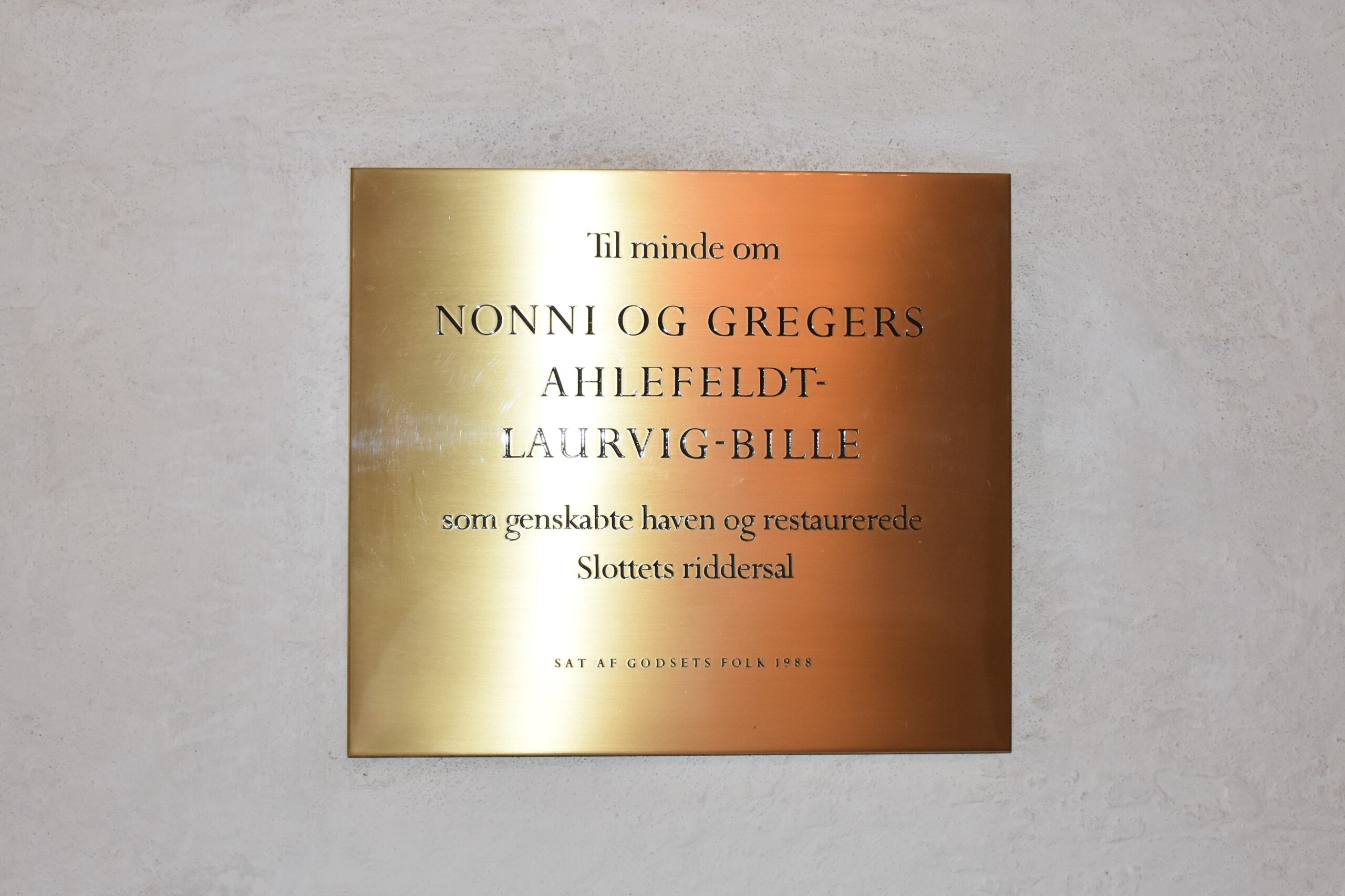 On one of the walls in the Banqueting Hall, there is a memorial plaque commemorating Count Gregers and Countess Nonni, who were both tragically killed in a car accident in Africa in 1985. 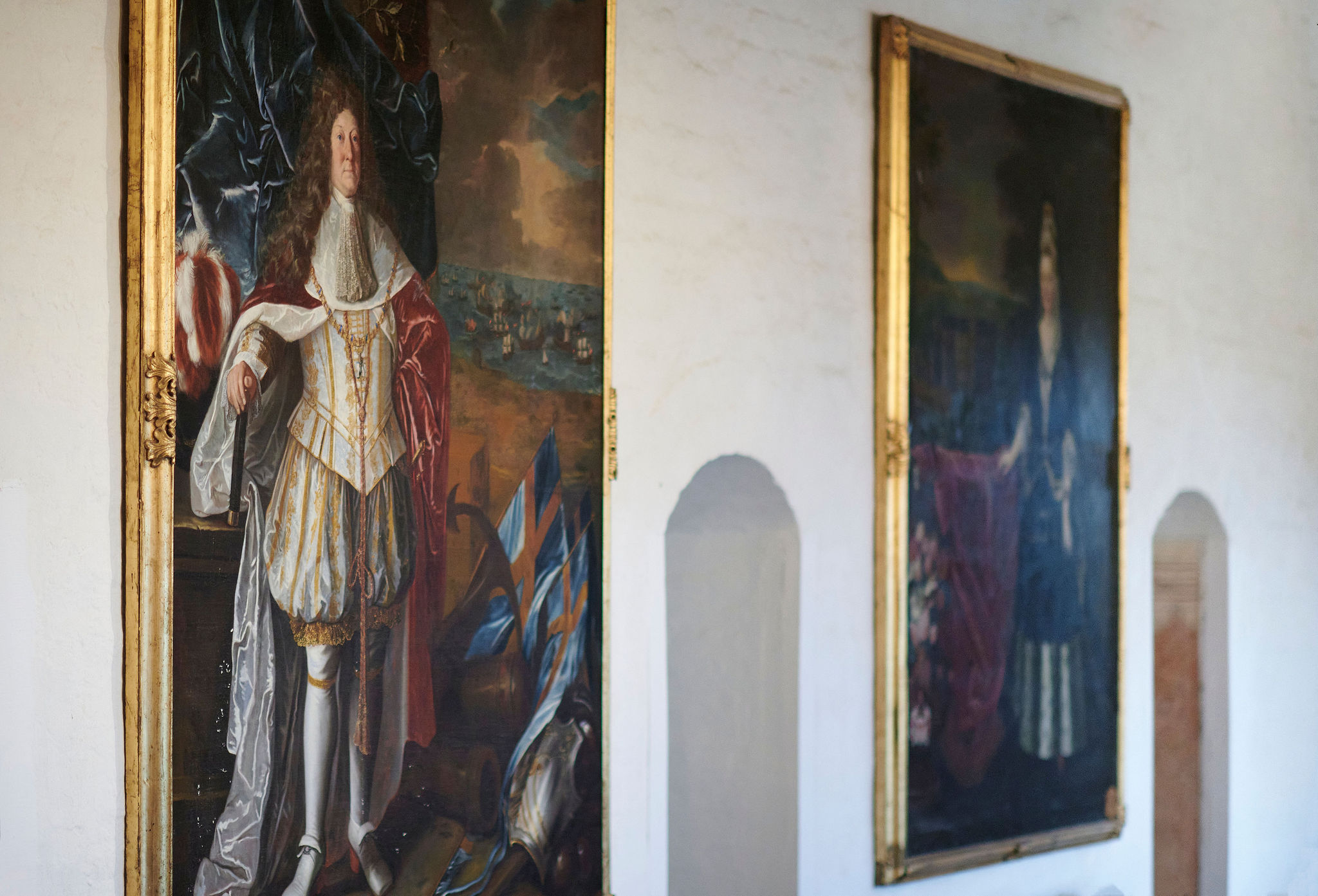 Two large portraits of Admiral Niels Juel and his wife, Margrethe Ulfeldt, hang on the long wall of the Banqueting Hall. They were painted by Benoît le Coffre, court painter to King Frederik IV. 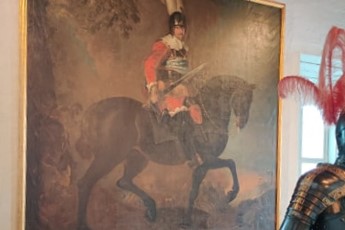 This painting represents King Christian IV on horseback and was presented to Laurids Brockenhuus by the king himself. It is believed to be the work of the Dutch painter Karel van Mander II, who painted four versions of the same motif. 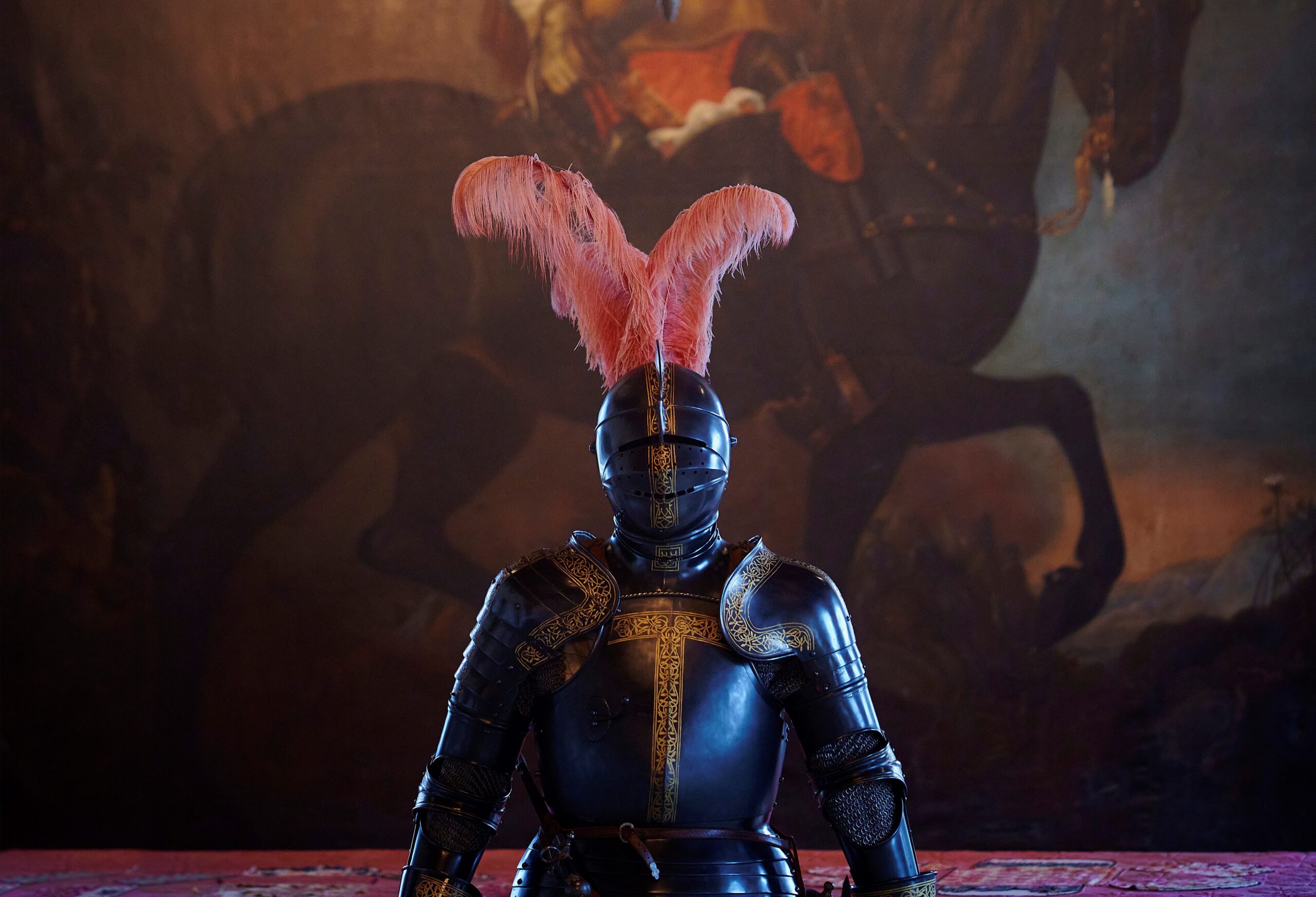 This is a suit of armour that Count Michael Ahlefeldt-Laurvig-Bille had made specially for himself in 1993. It is an exact copy of Frands Brockenhuus’ armour. In the stairwell tower, you can see a relief of Frands and his wife Anne, where Frands is wearing this armour. 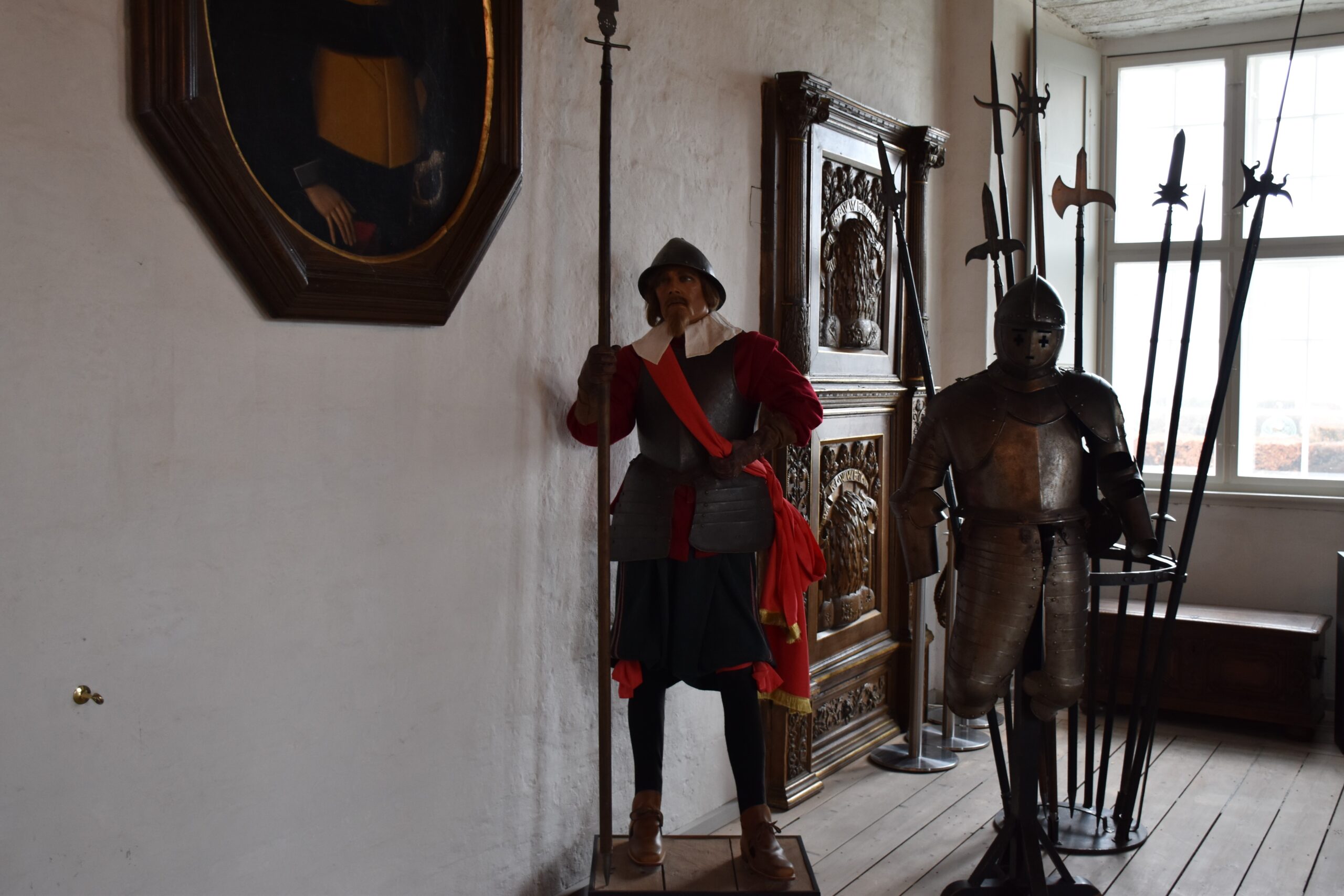 The soldier in the red uniform provides a good idea of how the castle footmen would have looked. The spear in his hand is called a “halberd ” and was used for defence. The soldier and the other suits of armour are on loan from Brahetrolleborg Castle. 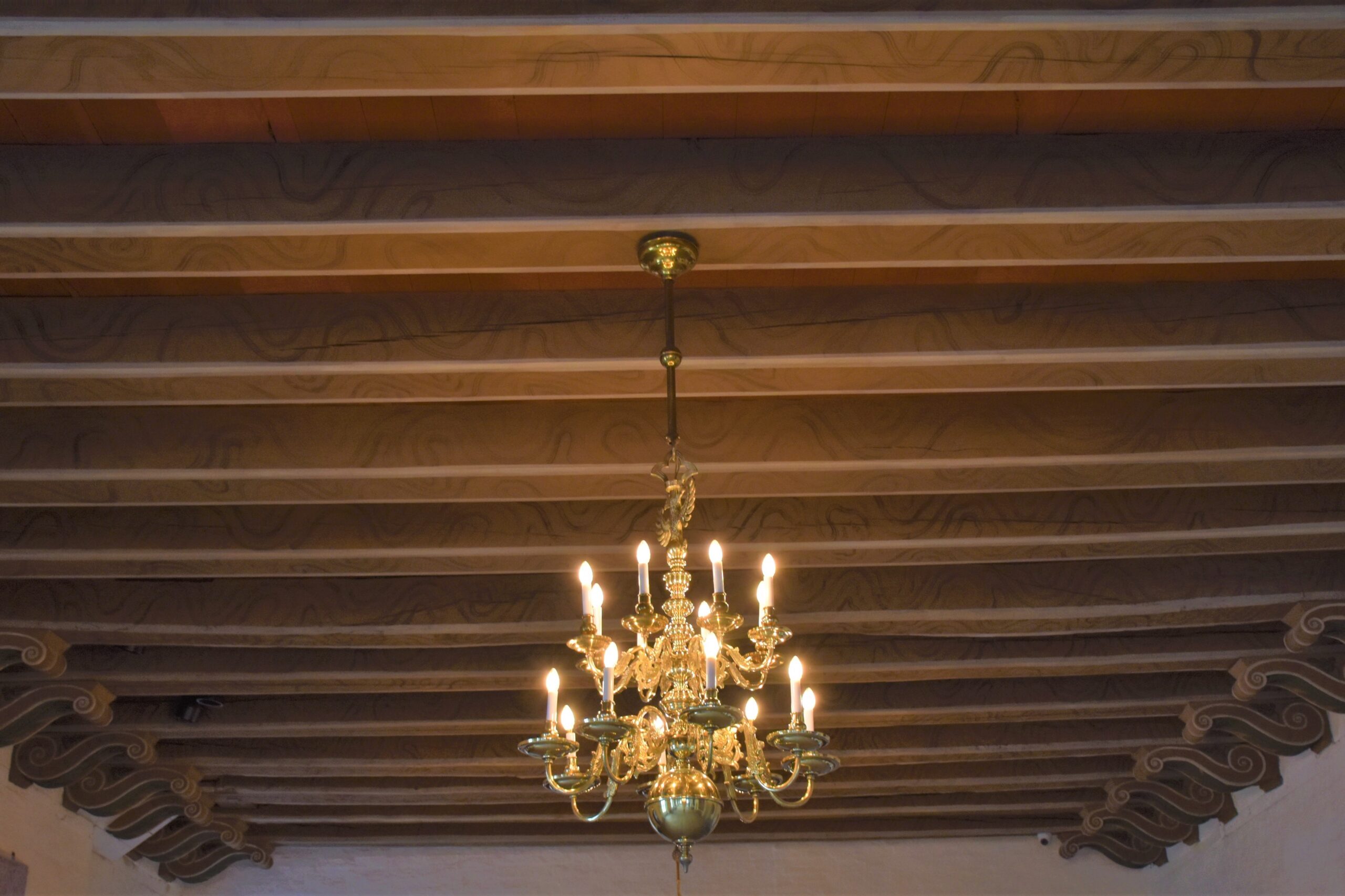 The ceiling in the Banqueting Hall is the original ceiling dating back to the time Egeskov was built. One of the beam heads is marked “1554” – the year Egeskov was completed.